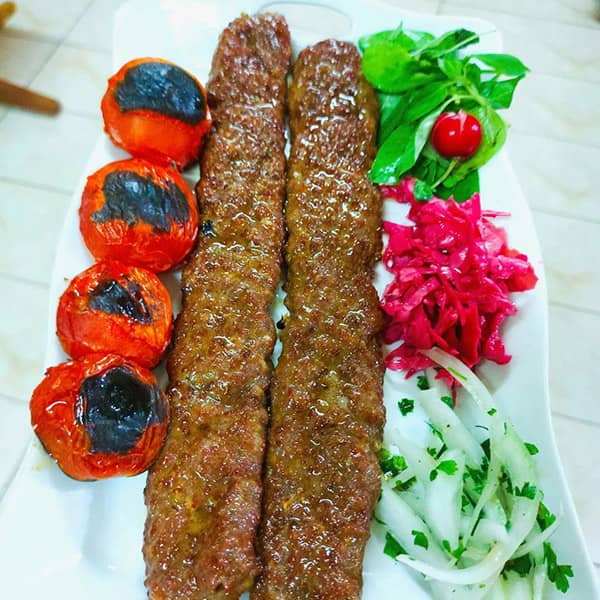 Today at Takrecipe, we bring you another delicious kebab from Iranian cuisine. Bonab kabab or Satouri kebab is a tasty and famous Iranian kebab, which is very similar to the Persian Kabab Koobideh. One significant difference between Kabab Koobideh and Bonab kebab is in the way of mincing the meat; While Kabab Koobideh meat is ground two to three times with a meat grinder and then mixed with grated onion, the Bonab kebab is pounded with the cleaver. In addition, Bonab kebab is prepared in a larger size than regular Kabab Koobideh and with a wider width. Also, the lamb’s tail is not used in Bonab kebab, which makes its texture a little harder. This delicious kebab belongs to Banab city of Azerbaijan, Iran, and is also known as Azerbaijani kebab. Stay with us to learn how to prepare this delightful kebab in your home.

Kabab Chenjeh is one of the traditional and delicious Middle Eastern dishes cooked with various flavors.

Pound the meat with a cleaver several times to mince them. To prepare Bonab kebab, you must have a special and large cleaver, which is not found in all kitchens, besides and it takes much effort to mince it this way. For this reason, you can grind the meat with a meat grinder. Be sure to grind it coarsely.

Next, peel and wash the onions, and finely chop them on the work surface with a knife. The onions should not be grated or minced. Besides, they have to be chopped so that their juice does not merge out and does not feel coarse under the teeth.

Now transfer the minced meat to the work surface and mix it well with the onions and a pinch of salt and black pepper until they are uniform.

Today at Tak Recipe, we are making a traditional meat dish from Iran.

Now knead the kebab mixture with your hand for about 10 minutes until it becomes cohesive and sticky. After kneading the kebab mixture well, to make the minced meat stickier, cover it with plastic wrap and put it in the refrigerator for an hour.

After an hour, take the kebab mixture out of the refrigerator and knead it a little.

To skewer kebabs, large and wide skewers should be used; however, if you don’t have the special Bonab kebab skewer, you can use a regular flat kebab skewer. Wet your hands and take 250 grams, or about the size of an orange of meat and attach it to a skewer. Press the meat gently from top to bottom and spread the meat evenly on the skewer. Then pinch its ends and set them aside. Repeat the same process to the end.

Today at Tak Recipe, we make one of the most delicious and satisfying dishes in Persian cuisine.

Fire up your grill. Once the coals are lit and covered with ash, place the skewers parallel to each other on the heat of the coal. In the beginning, you should turn them quickly to cook them properly. This quick turning will firm up the meat and prevent it from falling off the skewer.

After two minutes, the meat will turn light brown. At this stage, turn the skewers slowly and every few minutes to cook the meat thoroughly.

While grilling the Bonab kebabs, you can brush the butter and saffron on them to make them juicy and tasty. Serve the Bonab kebab with rice or bread and sprinkle some sumac. You can pair them with grilled tomatoes, yogurt, raw onions, and vegetables, especially basil. Enjoy your meal!

All rights reserved for TakRecipe.